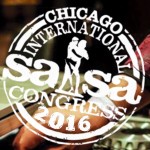 It is hard to believe that we have reached somewhat of a landmark with 15 years of the Chicago International Salsa Congress in Chicago already! We are all counting on having 15 more!  This labor of love by Rosita Ragan-Alamin (Executive Producer) and Saladeen Alamin (Co-Producer/Artistic Director) continues and the CISC would not be the success that it is without the hard work of so many volunteers.  This event is permanently on the calendar year after year for so many of us, but as Congress Administrative Manager Maggie Garcia observed, it is unbelievable that there are still salseros right here in Chicago who are unaware of this event.  We must continue to spread the good word!  This international “family reunion” of so many people from so many countries is truly wonderful.  As Louis from Chicago remarked, “Someone kept telling me, I know you from somewhere and I kept telling her it is from here at the Congress!” The February weather is always a challenge but no massive snow storms this year – just the usual cold and light dusting.  This is the perfect time to be inside dancing all day and night! For those of you who have yet to experience this extraordinary event, it is indeed a marathon!  We try to train for it in advance because stamina is required along with quite a few Lattes to keep going from 9:30 a.m. when the 70 workshops begin until 3 a.m. when the music and social dancing end.  Of course you do not have to attend the entire Thursday evening through Sunday night (actually Monday) at 3 a.m. close, but it is highly recommended!  Your dance partners will thank you as your dancing advances to the next level and you make plenty of new friends!  The Westin O’Hare is a great venue. Everyone there knows the drill and they are very accommodating.

The dance showcases were inspiring – such creative choreography, themes and great costumes!  The performers were from across the globe – from Cali to Paris!  Speaking of Cali, Sondeluz, one of the top dance teams from Cali, Colombia, are the biggest crowd pleasers with their performance of their Cali-style, lightning-fast footwork, emphasized with their sparkly shoes!  One of the Sondeluz members, Kevin, is a solo show stopper and he first appeared here at the Congress astounding us as a tiny tot and said he had been here three times.  Their director told me they had been coming since 2003 and had been here at CISC seven times.  We never tire of watching these team members and as they travel a great distance, they only make an appearance here about every other year, so it was great to have them back!  Mexican-born Zeke Ruvalcaba, also a co-artistic director of the Congress, is always exciting to watch with his high energy performance and creative choreography.  He also makes a great MC! Maricza Valentin, also a co-artistic director of CISC, performed with her Latin Rhythms Studio gang innovatively per usual.  Kudos also to Jorge Alvarez and Dennis Lopez for producing the matinee showcases.  We thank them for their tireless efforts in putting on this grand event!

The live music was great with Chicago’s own Edwin Sanchez Project once again kicking off the Congress Thursday night which is typically a quieter night.  There was even a Rueda Summit as well headed up by Mark Scollar.

On Friday night, Willie Rosario, a/k/a “Mr. Afinque,” made his first visit to the CISC.  Rosario, who was born in 1930 in Coamo, Puerto Rico, started guitar lessons at the age of 6 but later found his true love to be percussion.  He is a musician, composer and bandleader. When he was 17 the family moved to New York where he became acquainted with the NY Palladium while in the military.  Later he moved back to Puerto Rico feeling he would have more success there as well as preferring that his children grow up there.  Rosario played one set for an hour and a half straight and kept everyone moving.  It is almost as much fun observing the best dancers in the country at the CISC as it is to dance there.

Sammy Garcia is clearly a CISC regular!  He was here in 2007, 2008, 2011 and now 2016!  Personally Garcia’s four entertaining and well-choreographed, high energy vocalists and lively band were the most fun to watch and the best for dancing. When they were not headlining as Garcia and Co., as they were for the Sunday night closing performance, Garcia & Co. were the “house” band for Charlie Aponte and Azuquita on Saturday and Sunday nights respectively.

On Saturday night Sammy Garcia opened the show playing a set with his own band.  Around 12:30 a.m. Puerto Rican Charlie Aponte came on making his first appearance at CISC and was accompanied by Garcia & Co.  Aponte is best known for his time with El Gran Combo which has provided some of the greatest soneros known to salsa. He “retired” from El Gran Combo in 2014 but apparently did not stay retired for long.  Sammy Garcia simply switched out his lead vocalist for Aponte and kept the two chorus singers.  On Sunday, the closing night, Garcia did his first set with Azuquita (who was here in 2007) and then Garcia showcased his band for the rest of the evening.  There were three different ballrooms to choose from for dancing every evening.  Salsa and the live bands are always in the Grand Ballroom while individual rooms were provided for Kizomba and Bachata respectively – so all bases were covered!

Regarding the 70 workshops, it is amazing that I have watched so many of these performers grow up and some, such as Brandon Segovia, are now teaching.  I caught up with him after taking part of his cha cha class on Friday and not only is he already 23, but finishing up graduate school this summer as well.  He is still doing some competing as well as performing and teaching.  He and his partner, Serena Pav, have been performing at the Congress for 14 of its 15 years!

There is a reason Juan Calderon is always put in the Grand Ballroom at prime time – noon. For starters, “he is bilingual” (he said it not me) meaning he teaches on 1 and 2 concurrently which is all inclusive. He makes for great quotes with his dance tips, such as this one for the women – “when in doubt booty out!”  His quasi PSA (public service announcement) regarding dance hygiene was classic and will benefit us all.  In one of his classes he demonstrated once again how important it is to DANCE TO THE MUSIC.  The example he used (the 2009 favorite “Yo No Sé Mañana” by Luis Enrique which won the Latin Grammy for best tropical song) has a very slow start and you can’t start salsaing all over the place as many people do – you have to do something else very slowly until the salsa begins.  My dance partners were from all over – Fernando from Guadalajara to Mark from Minnesota.  The instructors and performers were just as international – from Cali, Colombia to Paris, France and all places in between.  I try to do workshops with new instructors every year but there are some that keep coming back year after year that are just not to be missed.  Other favorites just come every few years.  I heard from some regular attendees again that for some workshop time slots they wanted to take multiple classes and had trouble choosing and for other time slots nothing appealed.  Sometimes it is subjective, of course, but sometimes it is simply a matter of the entire time slot being completely on “1” or completely on “2.”

The Chicago-Midwest Salsa Open Final Round dance contest took place on the last day (Sunday) following the Emerging Artist Showcase with five couples.  The judges were instructors Tito Ortos, Elaine Guerrero and Gordon Neil.  The contest is free style but some appeared to be doing their choreographed routine. The obvious winning couple (Marc Brewer and Kiri Chapman) had been to “America’s Got Talent” and was comprised of some very experienced instructors.  They will be sent to the Puerto Rican Salsa Congress dance contest finals.  Also, our very own Miguel Mendez read an extremely moving poem he had written and his great delivery made it a rounding success.

Be sure to check out some of the other Salsa Congresses around the world if you want a nice vacation and a way to automatically connect with people in another country or even your own.  For example, you could attend the Paris Congress (parissalsacongress.com) or the Acapulco Salsa Congress put on for 12 years now by Victor Burgos who is usually participating at the CISC (think pool party/salsa and winter getaway for starters – Acapulcosalsacongress.mx)!  Above all, be sure to mark your calendars for the 16th Chicago International Salsa Congress taking place February 9-12, 2017 at the Hyatt Regency O’Hare!  You can start booking now! We look forward to seeing all of you again for year 16! For more info visit chicagosalsacongress.com. Click here for the Chicago Salsa Congress facebook page. Until then, keep dancing.